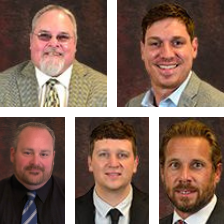 Several new team members have joined Millwood, Inc. in recent months. We have increased our sales team by 20 percent. Due to disruptions in the supply chain, Millwood was able to fill the need for customers who needed a more reliable supply.

“This helped position us for growth as companies return to a more normal state of work,” Assistant Director Kyle Countryman said.

Since June 1, Millwood has hired five salesmen. In the Western region, we hired Earl Wangler and Brian Clayton as regional managers.

Earl Wangler, Red River regional sales manager, is from Fort Worth, TX. Before joining the Millwood team, he owned an export business. One of the things that attracted him to Millwood was our mission and dedication to service.

“The company’s relationship and belief in Christ aligned a lot with my beliefs,” Earl said. “It made me want to be part of that, for sure.”

Brian Clayton, whose sales region is in the Midwest, grew up in Kansas City and has been in the packaging industry for over eight years.

“I’m looking forward to a new start and a new career,” Brian said.

Dakota Tucker, district sales manager in the Eastern region, lives in Pennsylvania with his wife and new child. Prior to joining the Millwood team, he worked for a packaging distributor. One factor that drove Dakota to decide to join Millwood was the team-based company culture and Millwood’s pillars.

“I was looking for something more team-driven,” Dakota said. “Millwood seemed like a place I would fit in .”

Tom Slaters, eastern regional sales manager, is from the Chicago area. He has spent his entire career in the packaging industry, which he has a passion for. The factor that drew Tom to Millwood was the company culture centered around faith and family.

“We call it the Millwood Family, and that’s true. You lose that with large corporations,” Tom said. “When I saw that we were faith-based, and that I can connect my faith and how I want to raise my family with my professional life, that pulled me in.”

We look forward to all the great things ahead for these new hires, and we are thankful for the opportunity to see so much growth to our family despite the uncertainty surrounding current times.