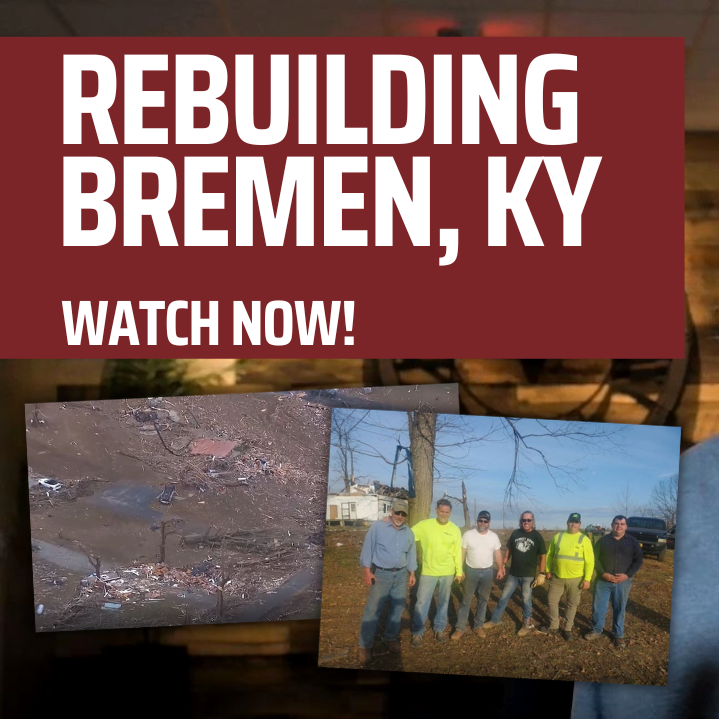 In December 2021, a 1.5-mile-wide F4 tornado tore through 257 miles of western and central Kentucky, killing dozens of people and laying waste to entire towns. One of those towns was Bremen, Kentucky, a rural community with a population of only 350. Bremen lost 11 of its residents in the tornado, including a 5-month-old infant. Where buildings and homes once stood, only debris and devastation remained.

“Millwood leaders were moved for us to go and be a part of that process of grieving and restoration, emotionally, physically and spiritually,” Pastor Luis Diaz, regional chaplain coordinator said.

Millwood chaplains and team members traveled to Kentucky twice to provide aid and ministry, once shortly after the tornado and again a few months later to continue assisting the rebuilding process.


Pastor Chuck Gantz, Pastor Jody Jones and Frank Hyatt, director of HR and chaplain ministries, were in contact with a former team member from Bremen who described the devastation of the town and its people. Everything from bath tubs to livestock to human beings were thrown miles away by the 200+ MPH winds, and the town was essentially flattened.

“It really was just unbelievable when we got down to Bremen,” Pastor Chuck said. “It looked like a bomb went off or a war went on, everything was just scattered.“

While assisting with the cleanup, the team also provided ministry and hope to the people they met in Bremen. They also made connections with local families, pastors, leaders, volunteers and builders and pledged to return to assist with the rebuilding process.

In April, Pastor Chuck returned to Bremen along with Pastor Luis Diaz and two team members from Glenwillow who had building experience, Ryan Cortés and Eliseo Palma. The cleanup process made major progress and rebuilding had begun. As house frames went up, the spirits of the people who lived in Bremen did too.

“The healing was beginning. That was the beautiful thing,” Pastor Chuck said. “People were being restored. You were starting to see people beginning to talk about there being hope in the future.”

Spiritual support and ministry was also a priority for the team as they helped build homes and clean debris. They emphasized the importance of hope for the future even as we pick up the pieces of a broken past.

Many of the local volunteers the team worked with led difficult lives even before the tornado upended them. Some dealt with addiction, prison or job loss. Despite their situations, they had talents and abilities that allowed them to help rebuild their community, like carpentry, electrical work and plumbing. The team worked alongside them, listening to their stories and responding with messages of hope.

“During that time, we also got to share where we were coming from and who we are as Millwood and as people of faith,” Pastor Diaz said. “We started going into deeper conversations even when we’re working on doing the roofing and installing a window here or a door there.”

Pastor Diaz also expressed that he was grateful to have the opportunity to serve others and bring them the love of Christ in a practical way. It also brought a deeper perspective and gratitude to the whole team as they realized how quickly a disaster can strike and take away your home and loved ones.

“Thank you to the plant managers who had the vision to send a couple of guys from the plant to come along with us, because those guys’ lives also were changed, to see not only the devastation, but to also see that there are people in this world that are givers, not only takers,” he said. “The takers eat well, but the givers sleep well. We slept well every night having that good feeling that we were helping a lot of people to be restored and to have hope.”