With all of the bad news flooding the airways, it's easy to get caught up in the negativity. Some follow the advice of their neighbor Mr. Fred Rodgers, and "look for the helpers."

In the case of a few Millwood team members, they were tired of looking and instead decided to be the helpers.

The team went to Houston under the direction of Operation Blessing, a "faith-based charity with a mission to demonstrate God’s love by alleviating human need and suffering in the United States and around the world." With their support, the Millwood volunteers got to work gutting houses destroyed by Hurricane Harvey.

People in need of assistance were to sign up, and then wait to be called. If they missed the call, or if they are unable to meet the team at their house, they get moved down the list. Since many people had evacuated and were unable to safely live in their home, it was challenging for many to make the return journey and receive assistance. Without their presence, however, volunteers were unable to enter the home and begin the difficult task of emptying a house.

One team member described her experience as a heartbreaking reminder of just how much we value what we own. "So many people lost everything, from their vehicles to their homes, not to mention furniture, clothing and food...Many of them didn't want to throw their stuff away, but they could face serious health issues if they don't." 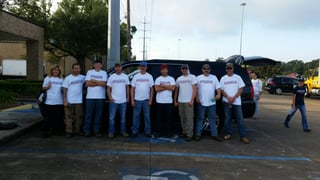 More than anything, the trip taught them what an enormous a project hurricane relief will be. After a week, the group had only managed to get through a few houses, and there are hundreds that need help. Fortunately, there were many other groups on their way to offer assistance.

So look for the helpers. There are so many of them- who knows? Maybe you could be one too.

For more information on Operation Blessing, visit their website or create a volunteer profile to be made aware of other opportunities to help.